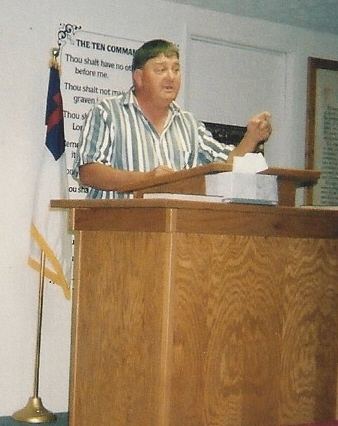 Bro. Andrew Simon “Andy” Jones, age 55, of the Cal Hill Community in Pine Knot, Kentucky, received his victory in Jesus on September 16, 2016, with his family at his side.

He is preceded in death by his parents, Rev. Charlie  and Wanda Jones, his grandparents, Rev. Ora Melton Jones and Bessie Elizabeth (Sharp) Jones, and Grant and Lotus (Young) Paul, a niece, Justina Marie Jones, a sister Mary Ann Clark and a brother Melton Berry Jones.

Andy was a general contractor having worked at many jobs.  He worked at the American Bag Factory as a mechanic until they closed.  He had been a deacon at the New Hope Baptist Church for many years and became an assistant pastor.  Ministering was his life; he loved his church.  He also loved his grandchildren, spending time with them and all his family.  He was blessed with many friends and leaves a legacy of love and grace.  He fought a good fight, he kept the faith and his faith carried him home.

To order memorial trees or send flowers to the family in memory of ANDREW "ANDY" JONES, please visit our flower store.