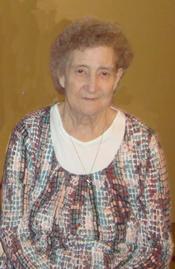 Funeral services will be held Thursday, April 18, 2013, at 1:00 p.m. in the chapel of Pine Knot Funeral Home with Bro. Mike Berry and Bro. Bill Berry officiating. She will be laid to rest at the Nancy Grave Cemetery. Visitation will be Wednesday from 6 a€" 9 p.m.

Born at Hilltop in McCreary County on February 5, 1932, she was the daughter of the late Clarence and Lula (Tapley) Watters. Besides her parents, she is preceded in death by two sons, Clarence Edward and Roy Lee Spradlin, two brothers; Austin and Homer Watters, and two sisters Pauline Spradlin and Fayrene Daugherty.

Mrs. Spradlin had worked as a housekeeper at the Parkland Motel and had worked at Outdoor Venture Corporation. She was a member of the Beech Grove Baptist Church. She enjoyed gardening, cooking and canning, taking care of her home and family and going to the cabin.

To order memorial trees or send flowers to the family in memory of CHRISTINE SPRADLIN, please visit our flower store.