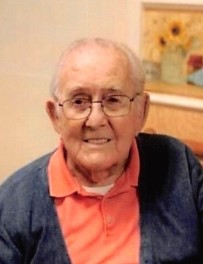 Delmer Lay age 95 of the Holly Hill Community passed from this life on Monday, December 28, 2020 at the Williamsburg Health & Rehabilitation Center.

He was born on December 4, 1925 in Creekmore, Kentucky to the late George and Clema (Gilreath) Lay. Delmer was married to the late Etta (Weaver) Lay on April 10, 1955. Born to this union were their children, Joy Ball and husband, Rick, of Holly Hill, Delmer Jr. and wife, Jennifer, of Georgetown, Kentucky, Derrick Lay of Holly Hill and longtime companion, Angela Flynn and her daughter, Kristen Owens and granddaughters, Peyson Rae and Emery Jayne Owens, Jonathan Lay and wife, Teresa of Holly Hill, and Alecia Stephens and husband, Jason, also of Holly Hill; and 6 grandchildren, Palace Stephens, Jon Jon, Joshua, Emma, Josiah, and Abby Lay.

In addition to his parents and wife, he is preceded in death by brothers, Boyd and Lowell Lay; and sisters, Nina Baird, Almereen Tower, and Bonnie Jean Jones.

Delmer hauled cars in his early years and then drove a coal truck for many years, while also farming. He was a heavy equipment operator in the Strip Pits till 1976. He was a strong man of faith and was highly respected. Delmer was saved in 1957 and was baptized by Rev. Ledford Perry. He attended Hayes Creek Church of God faithfully throughout his life, training up his children in church. Delmer would mention the Lord to nearly everyone he met. He lived a life of hard work and always willing to pray for anyone. He will be greatly missed, but we rejoice that one day, we will be reunited with him again in paradise.

Funeral service will be held on Sunday, January 3, 2021 at 2:00 pm at the Hayes Creek Church of God. Delmer will be laid to rest at the T. Chitwood Cemetery. The family will receive friends for visitation on Sunday after 12:00 noon until service time.

To order memorial trees or send flowers to the family in memory of Delmer Lay, please visit our flower store.