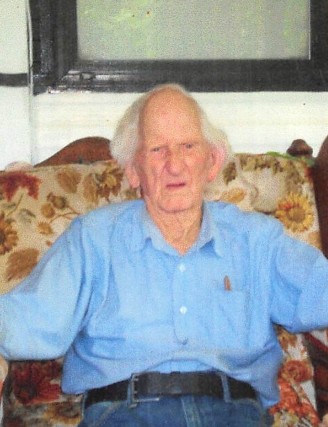 He was born April 24, 1922, in the Bethel Community of Pine Knot, to the late Finley and Sally (Kidd) Creekmore.  He is preceded in death by his former wife, Laura Belle (Moore) Creekmore, 2 daughtes, Margaret Marion and Carolyn Belle Creekmore, a brother, Clellan Creekmore, and two sisters: June Braden and Theresa Creekmore.

Delmus worked in the log woods and saw mill.  He had served in the United States Army and had attended the Bethel Baptist Church.  He enjoyed playing music and ginseng hunting.

Funeral services will be held Thursday, October 12, 2017, at 2:00 p.m. in the chapel of Pine Knot Funeral Home with Bro. Danny Staley officiating.  He will be laid to rest at the Bethel Cemetery.  Visitation will be Thursday from 12:00 noon until time of services.

To order memorial trees or send flowers to the family in memory of Delmus Creekmore, please visit our flower store.