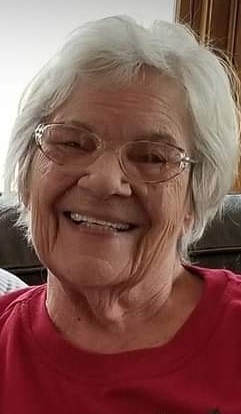 Dorothy May Washam, age 90, of West Bend, Wisconsin, formerly of Pine Knot, Kentucky passed away peacefully on November 18, 2020 surrounded by her family at her home.

She was born to the late Lewis E. Blatti and Mary Moria (Corbett) on June 27, 1930 in Clinton, Missouri. In addition to her parents she is preceded in death by her son, Stephen Howard Washam; grandson, baby Andrew Krebs Jr.; her brothers and sisters, Paul, Dolly, Deloris, James, Donna, Jack, Charles, Doug, Audrey, Mary Jane, Diane and Don.

In addition to being a dedicated and loving mother, Dorothy was a devout Christian and a member of the Good Shepherd Catholic Church of Whitley City. Throughout her entire life, she held an unwavering faith in Jesus. She was blessed with the gift of hospitality and loved cooking and baking for her family. She enjoyed sewing, singing, entertaining friends, playing scrabble or dominoes and watching old reruns of Andy Griffith shows. She volunteered her time and was a generous, giving woman. She was an accomplished artist and painter and a member of the Big South Fork Art Club. Most days you could likely find Dorothy in her art room working on her latest masterpiece. Her quick wit and contagious personality always made people smile and laugh. Not a day would go by that she wouldn’t be sharing a joke from the comics or one that she had read on Facebook.

Most of all, Dorothy’s greatest joy was her family. She was ever-present and loved them dearly. If anyone of her children or grandchildren were ever in need, she would always make sure their needs were met. She will be greatly missed but we rejoice that we will be reunited with her again one day in paradise.

Precious in the sight of the Lord is the death of His Saints. MAY HER MEMORY BE ETERNAL.

Per the recent orders by the Governor, a private funeral service was held on Tuesday, November 24, 2020 at 2:00 pm. Dorothy was laid to rest in the the East Chitwood Cemetery in Winfield, Tennessee.

In Lieu of flowers, the family requests that Memorial donations be made to the family. Donations can be mailed to the funeral home (PO Box 550 Pine Knot, KY 42635).

To order memorial trees or send flowers to the family in memory of Dorothy May Washam, please visit our flower store.