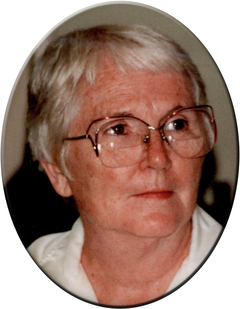 Edna (Creekmore) Carman, 91, of Burlington, died at 5:45 AM Wednesday, June 8, 2016, at Sunnybrook Assisted Living in Burlington. Born December 15, 1924, in Pine Knot, KY, she was the daughter of Thomas and Dora Neal Creekmore. On November 21, 1948, she married Kenneth Carman in Knoxville, Tennessee. She received a Masters in Christian Education from Berkeley Divinity School. Edna grew up on her father's Kentucky farm. She went to California to work as a secretary at the Naval base during WWII. She then attended Berkeley Divinity School where she met Kenneth. After they were married she went to the Philippines as a missionary teacher, where her daughter was born.  They returned to the United States in 1953 and settled in Salina, KS, where her two sons were born.  In 2010 they moved to Burlington. She was a friend of the Parkside First Baptist Church and a member of the Church at the Cross in Salina. In previous years she was a member of Salina Art Society, Sweet Adelines and was the author of several books. In recent years she enjoyed visits with her family, doing word search puzzles and going on car rides around Burlington. Survivors include her husband; two sons, Scott (Teresa) Carman of Patterson, CA, Paul (Nara) Carman of Evanston, IL; one daughter, Kathy (Tyrone) Henderson of Burlington; many grandchildren; several great-grandchildren; one sister, Anna Mary Creekmore of Strunk, KY; and several nieces and nephews She was preceded in death by her parents and two brothers, J.C. and Willard Creekmore. Cremation has been entrusted to the care of Prugh~Thielen Crematory. The memorial service for Mrs. Carman will be 2:00 PM Friday, June 10, 2016, at Prugh~Thielen Funeral Home and Crematory with Reverend Marshall Jackman officiating.  A time of food and fellowship will be held at the Family Buffet after the service. Burial will be in Pine Knot Cemetery in Pine Knot, KY at a later date. Memorials have been established for Parkside First Baptist Church and Great River Hospice. Prugh~Thielen Funeral Home & Crematory is in care of the arrangements. A photo tribute can be viewed and condolences can be sent to the family by visiting Edna's obituary at www.prughthielencares.com.

Graveside service to be held Saturday July 23, 2016 at 10:00am in Pine Knot Cemetery. Pine Knot Funeral Home is assisting the family of Edna (Creekmore) Carmen with local arrangements.

To order memorial trees or send flowers to the family in memory of Edna Carman, please visit our flower store.