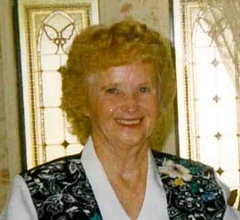 Geneva Nell Kidd, of Pine Knot, Kentucky, passed peacefully into eternal life on Thursday, May 12, 2016, at the Signature Health Care facility in Pine Knot.  She had attained the age of 92 years and three months.

Born in Pine Knot, Kentucky, on February 12, 1924, she was the daughter of Bill and Ethel (Hamlin) Richmond.  Her parents precede her in death along with three brothers: Joe Bill Richmond, Thomas Richmond and David Richmond, and four sisters: Dorothy Shepherd and Janie Shambalee, and Ina May and Shirley Richmond who died at an early age, her son-in-law Everett Sons and a grandson Danny Wayne Sons.

Mrs. Kidd had worked for Newtone Chime Company in Cincinnati for 24 years.  She was a member of the Bethel Baptist Church and enjoyed going to shopping malls and spending time with her daughter and grandchildren.

Funeral services were held Saturday, May 14, 2016, at 1:00 p.m. in the chapel of Pine Knot Funeral Home with Bro. Scotty Corder officiating.  Special music was by Israel Clark who performed “Amazing Grace” and “Welcome Home”.  She was laid to rest at the Angel Cemetery at Stearns, Kentucky.

To order memorial trees or send flowers to the family in memory of Geneva Nell Kidd, please visit our flower store.