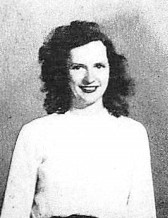 Hazel Opal Vaughn age 92 of Monticello, Kentucky passed from this life on Sunday, May 26, 2019 at the Golden Years Nursing Home.

She was born on April 27, 1927 in Wayne County, Kentucky to the late Lucian Burke and Ethel (Kidd) Burke. Hazel was a homemaker and a Seventh-Day Adventist.

To order memorial trees or send flowers to the family in memory of Hazel Opal Vaughn, please visit our flower store.