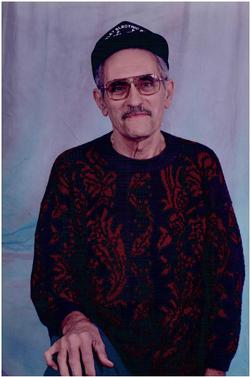 Leonard King, age 75, of Pine Knot, passed away Wednesday, January 29, 2014, at the Hillcrest Nursing Home in Corbin, Kentucky. Funeral services will be held Saturday at 1:00 p.m. in the chapel of Pine Knot Funeral Home with Bro. Terry West and Bro. Dillard Bryant officiating. Burial will be at the Pine Knot Cemetery. The family will receive friends Friday evening from 6 a€" 9 pm.

Leonard was born on July 26, 1938, in McCreary County, to the late Mack and Julie Edna (Jones) King. Besides his parents, he is preceded in death by his wife Sarah (Foster) King, two sons Bobby and Raymond Foster, a daughter Donna Rigney, two brothers; Clarence and Herman King, and three sisters, Wilma Duncan, Myrtle Meadors and Glinnis King.

Leonard had worked in the sawmills and as a general laborer. He was a member of the Second Street Baptist Church. He loved his grandchildren and his favorite pastime was fishing and rabbit hunting.

To order memorial trees or send flowers to the family in memory of LEONARD KING, please visit our flower store.