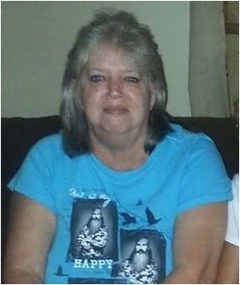 Linda was born on July 15, 1959 to the late Ed Maxey and Gene Spencer in Cincinnati, Ohio.

Besides her parents she is preceded in death by Goldie Maxey which played the role has her mother.

Linda was of the Baptist faith and enjoyed playing bingo, family, and playing games.

The funeral service will be on Wednesday January 6, 2016 at 3:00pm in the chapel of the Pine Knot Funeral Home with burial to follow in the Ryan Cemetery in Gumfork, Tennessee. The family will receive friends on Wednesday from 1:00pm until funeral time. Pine Knot Funeral Home is assisting the family of Linda Crabtree with her funeral arrangements.

To order memorial trees or send flowers to the family in memory of Linda Crabtree, please visit our flower store.