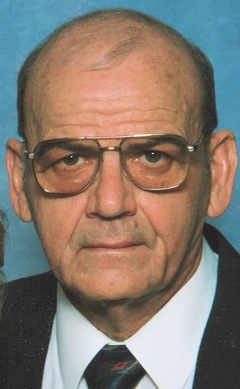 Lowell Calvin Strunk was welcomed home by his Heavenly Father on Wednesday, June 1, 2016 while at the Tennova Residential Hospice facility in Halls, TN. He was born in Strunk, KY on April 26, 1931 to the late Elijah and Dorothy Strunk. He is survived by his wife June T. Strunk, daughter Wanda Stephens (Jay), sons Timothy (Jayna), and Randall (Ellen), and brothers Wetzel (Margaret), Renn (Dee), and sister Argylene Bridges, and grandchildren Bradley Stephens, Kimberly Stephens Wood (Ben), Angela Stephens and David, Heather, Hayley, John, and Josh Strunk and many beloved nieces and nephews.
He was preceded in death by his parents, son Warren, and brothers Morris, Loran, and Chan. He served in the US Navy during the Korean War as a radio operator. While crossing the Pacific Ocean 25 times, he thought of a beautiful girl back home named June whom he hoped to marry and how he would prepare himself to provide for her and their future children. Taking the opportunity afforded by the GI Bill, he graduated from the University of Kentucky with a civil engineering degree in 1959 and began his career at TVA in Knoxville. June and Lowell expanded their family there while attending Wallace Memorial Baptist Church. He began his 24 year service to the City of Oak Ridge in 1967 as the City Engineer. Later as Oak Ridge City Public Works Director, Lowell enjoyed meeting citizens and providing them with clean drinking water, rarely interrupted electric service, and well-functioning roads. In remarkable contrast, yet consistent theme of character, Lowell grew up in rural America during the Great Depression carrying in firewood from the mountains and bringing in water from the creek for his family, and then he reached the pinnacle of his career by directing the provision of modern utility services for one of the nation's most technologically advanced cities. During his 47 years in Oak Ridge, Lowell and family faithfully attended and loved Robertsville Baptist Church and New Life Church of the Nazarene. Family and friends are invited to celebrate his life and legacy by attending his funeral service at 3 pm Saturday, June 4 at New Life Church of the Nazarene, 200 Lafayette Dr. Oak Ridge, TN, where you will be invited to share a story about Lowell. The family will receive friends prior to the service from 1 til 3pm.A  graveside service will be held at 2 pm on Sunday, June 5 at Jones Cemetery in Strunk, KY. Weatherford Mortuary is in charge of arrangements

To order memorial trees or send flowers to the family in memory of Lowell Calvin Strunk, please visit our flower store.