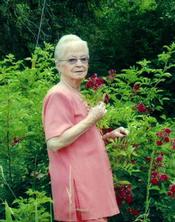 Funeral services will be Wednesday July 11, 2012 at 1pm in the chapel of Pine Knot Funeral Home with Rev. Daniel Ridener officiating. Burial will follow in the Smith Cemetery at Round top. The family will receive friends on Tuesday from 6-9 at the funeral home.

Born in McCreary County on April 13, 1935. she was the daughter of the late James and Carrie Garland Seward. In addition to her parents, she is preceded in death by her husband Kelly Clark.

3 daughters: Patti Watters and her husband Keith of Pekin, IN, Donna King of Pine Knot and Kathy Ward of McKee, Kentucky.

Kathy was a hair dresser by trade and once owned the Stuff Store in Whitley City. She had made the Deans List as well as having been inducted to the Phi Beta Cappa Sorority of Somerset Community College while in her 50's.

Kathy enjoyed quilting, crochet and gardening, and fishing with her sisters and brothers in law was her passion. She loved spending time with her grandchildren.

To order memorial trees or send flowers to the family in memory of MAY "KATHY" CLARK, please visit our flower store.