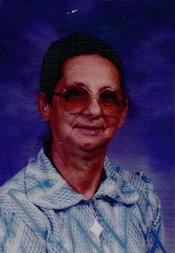 Funeral services will be held Wednesday January 15, 2014 at 2:00pm at Pine Knot Funeral Home. Burial will be at the King Meadows Cemetery in Pine Knot. Visitation will be Wednesday from 11 a.m. until time for services.

Born April 18, 1932, in Stearns, Kentucky, she was the daughter of the late Luther and Hazel (Kidd) Martin. Besides her parents, she is preceded in death by her husband Bradley Duncan, and two brothers, Luther Martin, Jr. and Carl Martin.

Mrs. Duncan had been a cook for the McCreary County Schools and a member of the Meadows Grove Baptist Church. She enjoyed sewing and cooking for her family.

To order memorial trees or send flowers to the family in memory of RUTH DUNCAN, please visit our flower store.