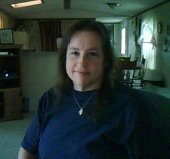 Tonya J. Colburn, of Strunk, Kentucky, passed away Friday, March 20, 2015, at the Lake Cumberland Regional Hospital in Somerset, Kentucky.  She was 52 years old.

Tonya was born in Orlando, Florida on November 30, 1962, to the late Tommy and Doris (Weaver) Colburn.  Besides her parents, she is preceded in death by a sister Betty Colburn, a brother Rickey Colburn a grandchild Toni Singer and her Uncle Jake.

Tonya had worked in food service for K-Mart and had owned her own restaurant, Tonya’s Home Cooking.  She enjoyed cooking and feeding everyone and especially enjoyed cooking for holiday gatherings.  She loved horses and horseback riding.  She enjoyed spending time with her grandchildren and taking them to the waterpark.  She had many friends and Facebook friends who will greatly miss her.

Funeral services will be held Tuesday, March 24, 2015, at 5:00 p.m. graveside at the Silerville Cemetery in Strunk, Kentucky with Bro. Willis Troxell officiating.

To order memorial trees or send flowers to the family in memory of Tonya J. Colburn, please visit our flower store.