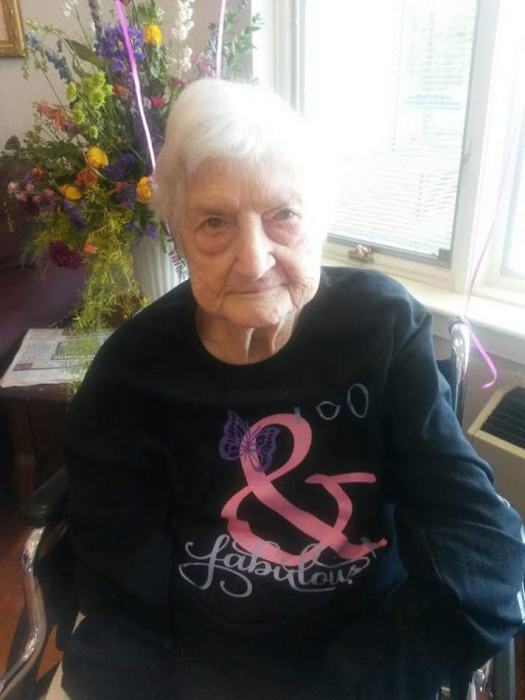 Vida Lucille King, age 100, of Strunk, Kentucky, passed away on Friday September 30, 2016 at the Signature Health Care in Pine Knot.

Funeral services will be Sunday October 2, 2016, at 2:00pm in the chapel of the Pine Knot Funeral Home with Bro. Donnie Jones and Bro. Gary Boyatt officiating with burial to follow in the Duncan Cemetery.

She was born at Foster Crossroads. Tennessee, on June 15, 1916, daughter of the late John Melton and Ella (Foster) Watters. In addition to her parents, she is preceded in death by her husband Herbert King whom she married on April 18, 1937; son Roger Hal King, four brothers Chester A, Warren G., Holland, and Willis Watters, four sisters Gladys Wilson, Jewel Boyatt, Christine Watters, and Myrtle Manley, two grandchildren Debra Elaine King and Herbert Lee King.

Lucille was the oldest member at the New Hope Baptist Church. She loved going to church and singing in the church choir. Lucille enjoyed planting flowers and babysitting kids.

The family would like to give a special thank you to the staff at the Signature Health Care.

Pine Knot Funeral Home is assisting the family of Lucille King with her funeral arrangements.

To order memorial trees or send flowers to the family in memory of Vida "Lucille" King, please visit our flower store.