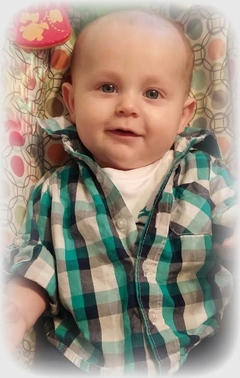 Zerek was born in Somerset, Kentucky, on August 24, 2015. He was the infant son of Zachary and Stephanie (Bowman) Slaven.  He is preceded in death by his great great grandfather Estel Edgar Perkins and great grandfather Kenneth Eugene “Pete” Bowman.

Zerek enjoyed eating, watching TV, playing with his daddy’s beard and to suck on his toes.

Funeral services will be held at 1:00 p.m., Saturday, February 6, 2016, in the chapel of Pine Knot Funeral Home with Bro. Bruce Perkins and Josh Stephens officiating with burial to follow in the Silersville Cemetery. The family will receive friends from 11:00am on Saturday until funeral time.

“I’ll love you forever, I’ll like you for always, As long as I’m living my baby you’ll be.”

Heavens gain was our loss when our precious baby boy was called by our Lord.

To order memorial trees or send flowers to the family in memory of Zerek Alexander Slaven, please visit our flower store.